The Dagestani star, a perfect 14-0, returns to action on Friday at Bellator 283, and was asked if the occasion would be an opportunity to establish himself as simply “Usman Nurmagomedov,” and put an end to the constant references to him as Khabib’s cousin. Nurmagomedov appeared surprised by the question.

“Why? I like when somebody says that, cousin, Khabib’s cousin,” he told media outlets including Cageside Press. “I’m feeling good.”

Nurmagomedov goes up against Team Alpha Male’s Chris Gonzalez Friday, who has stated that he’s not impressed by the Dagestani’s competition.

“Come on brother. How many fights he has? Seven? I have 14 fights,” Nurmagomedov replied. “Now, we will wait, and I’m going to show him.”

With an unblemished record and already on a roll in Bellator, title talk has already begun. Nurmagomedov had nothing to say about lightweight champ Patricky Pitbull during Wednesday’s media day, instead choosing to focus on his own fight. But in terms of a championship opportunity, he stated that “we’re gonna see after this fight.”

“I think I’m close. Why not?” Asked if he could fight for the belt this year, Usman replied simply “we’ll see.” 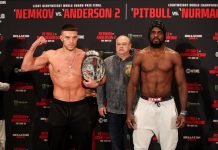 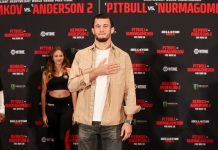