We did it two years ago, and we’re back again. We’ve been scouting the globe to find you the best MMA prospects out there, country by country.

In this edition, we turn the focus stateside to look at some of the top fighting prospects coming out of the United States. Two years ago, here’s who we had listed:

Who’s in the spotlight this year? Let’s take a look.

Bilder is the defending CFFC featherweight champion. CFFC is a staple promotion in New Jersey and one of the best shows aired on UFC Fight Pass.

Bilder was highly thought of before even coming to CFFC as his debut for them was for the title. His two fights for CFFC have been memorable performances from Bilder. Bilder, who was down in both those fights, came back and got the finish. So much toughness and resilience and dog in Bilder — it’s just fantastic to watch. Bilder is deserving in all areas inside and outside of fighting. Not a long of guys with his grit and determination. 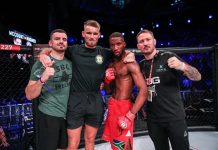