Burlington, ON — Over the past several of years, Ontario’s BTC has become one of the preeminent mixed martial arts promotions in Canada. In Ontario, where MMA events are few and far between more so than ever in the pandemic era, they’re often the only game in town.

Which makes the launch of the company’s Challenger Series at BTC 16 all the more important.

After a 31-second TKO of Cody Kent by Keyano Young got the night started, it was the Matt Smith vs. Curtis Richard welterweight scrap that saw tragedy unfold. Evoking memories of Anderson Silva and Chris Weidman, Richard fired a low kick in the second round that snapped his leg as it connected with Smith’s. Richard immediately went down, with the ref jumping in to wave off the fight and make room for the paramedics to enter.

Richard left cage to a round of applause from the crowd on hand, with the scene a reminder of just how dangerous the sport can be.

Curtis Richard just snapped his leg on a kick checked by Matt Smith here at #BTC16 -rough end to what was an entertaining fight to that point. Reminiscent of Silva, Weidman, etc. Carried out to a round of applause and transported to hospital (obviously). Wishing him all the best pic.twitter.com/lcheIAwXvO

One fight later, Ryan Yapsam made his professional debut in a bantamweight bout against Amin Almelik, and made quite an impression. Fighting out of Ajax, Ontario, Yapsam had taken an amateur bout in 2016 against Tony Laramie, whose brother T.J. had a brief stint in the UFC recently. Losing that ammy match-up, Yapsam took time off from MMA to train in individual disciplines, competing in boxing, wrestling, BJJ, and Muay Thai — winning a national title in the latter.

Refocused, Yapsam displayed a well-rounded skill set Saturday night, using his wrestling in the opening round, before ripping his opponent’s body with kicks in the second. Some dazzling high kicks followed, before Yapsam went back to his grappling in a competitive third round en route to a unanimous decision win.

Kevin Popowick-Bastien, with Bellator’s Aaron Jeffery in his corner, submitted lightweight Charles Azoulay with a first-round rear-naked choke to even his record at 2-2. Azoulay walked out to an inspired choice in Hoist the Colours, but it was Popowick-Bastien who walked away with the victory.

Armenian-Canadian light heavyweight Dorjan Dokaj improved to 3-1 with a one-sided beatdown of Nick Klein that was finally waved off in the third, but it was arguably the co-main event that stole the show. That saw Thunder Bay native Bobby Poulter put on an inspired performance against American LFA veteran Nelly Thompson, battering Thompson with knees and uppercuts en route to a TKO finish roughly halfway through the opening round.

The win saw Poulter bounce back from the first loss of his pro career, clearly a motivational factor going into the fight.

The BTC 16 main event, meanwhile, saw featherweight Cody Chovancek pick up his third pro win, improving to 3-1 and handing Jake Geauvreau his first loss as a professional. Chovancek won it on the scorecards, getting out to an early lead that resulted in a unanimous decision from the judges.

Full results from BTC 16: Challenger Series 1 are available here. The promotion will be back in action next month, with BTC 17 taking place Friday, August 12, 2022 at the Queen’s Manor Event Centre in Brampton, ON. 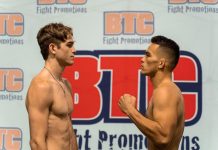