With David Onama’s original UFC Vegas 58 opponent Austin Lingo pulling out of their featherweight fight, fate had served up an interesting twice.

In Lingo’s place stepped promotional newcomer Garrett Armfield, a short-notice replacement who had actually faced Onama once before, as an amateur.

He now had a chance to avenge that earlier loss and make a statement in his UFC debut.

Both guys started off the fight in the center cage pumping out their jab. Armfield tied up with Onama but it was Onama that got two brief takedowns. Armfield was scrambling well and still pressed Onama against the cage. Onama attempted a kimura as he went down but Armfield did obtain the top position. It didn’t last long and Onama got back to his feet. Armfield was landing some slick combinations while slipping the punches of Onama. Armfield was more labored with his punches at the end of the round and Onama landed a few left hands to close out the round.

Again in round two they both meet center cage and throw heat. Onama was throwing the heavies strikes but Armfield was more accurate. Armfield did shoot in on a takedown but Onama sprawled and circled to the back. Armfield stood up and Onama took him back down and right back on the back. Never sitting still Armfield did roll to his back. When he did, Onama locked in an arm triangle that eventually put Armfield to sleep.

Came in with the 𝙎𝙇𝙄𝘾𝙆 RD 2 submission ⚡️ 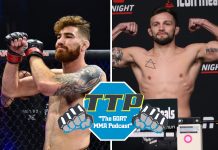