The KO finish was the sort rarely seen in the flyweight division, and proved Osbourne, 30, has considerable power for his size. He’s always known that — although he might even have surprised himself a bit with just how much explosiveness can be found in his hands.

“It was like a check to let him know that I’m right in front of his face. It was one of those things where I was like, okay I guess I do have a lot more power than I think, because I barely put anything on that one,” Osbourne (11-4, 1NC) continued. “It was a little surprising how much power I realized I actually have.”

The check hook was something Osbourne and his coach had been working on in advance of the fight. “John Wood and I worked that like constantly, because we knew that he was going to come in really, really fast. John told me that that was going to happen,” Osbourne revealed. “So it worked out to John’s precise measurements and calculations.”

Following the win, Osbourne called out Jeff Molina, who also fought on the UFC Vegas 56 card. That callout had a lot to do with timing, he admitted.

“I’m just trying to stay active. We both fought the same night. Okay, we would both have enough time to get ready for another fight. It would be good timing,” Osbourne continued, giving props to Molina’s own stand-up. “I think Jeff Molina is a great stand-up fighter. I always want to test my abilities. So I’m just like, alright, let’s give the crowd a nice little banger. Let’s flip this octagon upside down.” 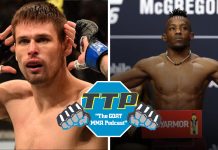 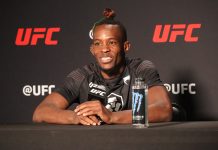