Of course, it wasn’t a good night for everyone. The losing half of the card will have to regroup, so let’s take a look at where those on the main card go from here.

You win some, you lose some, and the judges cost you some. There has been plenty of debate about UFC Austin’s main event. It wasn’t quite a robbery, just a very close fight, and someone had to lose. Turns out, it’s New England Mafia member Kattar.

On paper, this is a loss, but it probably won’t set him back very far. Kattar deserves another main event, and another shot at re-establishing his name in the featherweight division. There’s also one name, ranked immediately below him at the moment, that makes a lot of sense: The Korean Zombie.

Zombie lost a shot at gold back in April, but it doesn’t seem like he’s ready to retire just yet. TKZ vs. Kattar wouldn’t just be fireworks, it would be the Fourth of July.

Kattar’s next fight: The Korean Zombie

“The Dirty Bird” was grounded by Kevin Holland at UFC Austin, with Holland locking up the win with a D’arce choke. The loss snapped a three-fight win streak for veteran Means, who at 38 probably just has a handful of fights left. Means isn’t anywhere near the rankings, but can draw eyeballs against other mid-card guys (or, with someone like Holland, works as a co-main event in a pinch). Next up, Mickey Gall has been floundering of late. Let’s see how he does against a wily veteran in Means.

Contender Series vet Albert Duraev was lit up by a fired up Joaquin Buckley at UFC Austin. This setback should slow his roll a little. Duraev had a bit of hype behind him thanks to his willingness to fight and take short turnarounds, but he’s now 1-1 inside the octagon.

A.J. Dobson is 0-1 and coming off a loss in his promotional debut back in February. He doesn’t have a fight booked. If Duraev wants to keep his pace up, that match-up could work.

Two fights, and two close split decisions, have greeted Guram Kutateladze in the UFC. One, against Mateusz Gamrot, went his way. The other, at UFC Austin against Damir Ismagulov, did not. The biggest problem is the year plus of down time in between Kutateladze’s fights. He was twice booked against Don Madge (now with the PFL), but injuries forced him out.

Hopefully, Kutateladze can get back to work sooner this time. He remains a prospect to watch, and should get a decent opponent. Speaking of — Ottman Azaitar hasn’t fought since prior to that notorious Fight Island incident in January 2021, where he and his team cut off their wrist bands and slipped them to people outside the quarantine zone. The UFC initially cut Azaitar, then opted to give him a second chance.

Azaitar is a perfect 13-0, but as a result of his boneheaded decision, he was pulled from his fight with Matt Frevola. If he’s ready to return, Kutateladze works.

“The Cuban Missile Crisis” Marquez wound up under heavy fire and put away by Gregory “Robocop” Rodriguez at UFC Austin. That snapped a two-fight win streak, with both victories coming in 2021. Marquez saw his profile skyrocket when he called out Miley Cyrus following a February 13, 2021 victory over Maki Pitolo. He hasn’t hit the same heights since, and will need to go back to the drawing board after a fight that saw him used for target practice.

When he returns, Marquez still has a couple of things going for him: he doesn’t get in boring fights, and has finished every fight he’s ever won. That includes his Contender Series fight against Phil Hawes in 2017. Hawes also fought at UFC Austin, lighting up Deron Winn for a TKO finish. A rematch between these two could be quite interesting.

Thanks to some off-putting comments about Brazilians while working in the corner of girlfriend KGB Lee a while back, Tony Kelley was public enemy number one at UFC Austin. He doubled down on it, breaking out double middle fingers before the fight, but it was Adrian Yanez flipping him off after finishing Kelley in the opening round.

Kelley is a solid fighter who had a couple of wins in the UFC’s bantamweight division prior to the loss. In this case, the UFC might as well cash in on his notoriety and book him against a Brazilian next.

Contender Series winner Saimon Oliveira lost his promotional debut earlier this year. He was supposed to fight at UFC 275, but withdrew from a bout with Kyung Ho Kang. Match these two up later in the year. 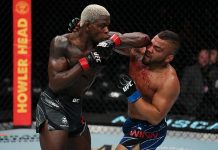 Deron Winn Suffers Concussion After Fainting, Out of UFC Vegas 66