After losing on Dana White’s Contender Series last year, Lucas Almeida went back to the regional scene, picked up a win, and will debut at UFC Vegas 56 against TUF 27 winner Michael Trizano.

The featherweight match-up found Trizano looking to bounce back from a loss to Hakeem Dawodu. Almeida, meanwhile, said ahead of the bout that he planned to prioritize excitement.

Early on Almeida was getting after it. His hands were super quick and was getting off some good kicks and combinations with his hands. Trizano not rushing anything and almost halfway in engaged in the clinch. Nothing came from it and Almeida escaped. Almeida landed a beautiful combination going to the head, body, and ended it with a nasty leg kick. In the last minute, Trizano hurt Almeida bad with a left and sat him down with an uppercut. Not enough time to finish but Trizano ended the round on top.

In round two Almeida didn’t seem shaken as he was still throwing well. He kept focused on that lead leg of Trizano. Trizano was more patient and was looking to pick his shots countering Almeida. Almeida this time countered Trizano with a left hand and dropped him. Almeida jumped in guard. Almeida stood up in the guard and as he dove back down he headbutted Trizano cutting him wide open. Trizano did manage to get back to his feet and Almeida ended the round with a big punch.

In the final round, Almeida started chopping again at that lead leg of Trizano. Trizano was throwing and Almeida slipped a few punches and counted with a left hook. It dropped Trizano and Almeida jumped on him with hammer fist. Trizano culled up as Almeida kept firing and the ref eventually stepped in.

How about THAT for your UFC debut?!? 😤 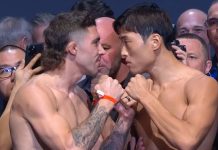