The co-main event of UFC Vegas 56 brought together two of top-15 featherweights as Dan Ige took on Movsar Evloev on Saturday.

Ige (15-5) was still ranked #10 despite dropping his last two bouts by decision to Josh Emmett and the Korean Zombie respectively. He holds wins over Edson Barboza, Mirsad Bektic and Gavin Tucker.

Evloev (15-0) was ranked #13 and was 5-0 in the UFC with wins over Enrique Barzola, Nik Lentz and Hakeem Dawodu to name a few. He looked to rise in the rankings with a win at the UFC APEX.

Round 1, Ige came out firing the jab and landing on Evloev. Getting pretty much everything he wanted to the body as well until Evloev landed a jumping knee and hurt Ige. From that point on it was all Evloev as he switched from throwing combinations on Ige and shooting for takedowns. Evloev was able to slam Ige to the ground, but Ige got to his feet multiple times.

Round 2 was all Evloev with Ige seemingly just a step behind his opponent for the entire round. Evloev took Ige down for the fourth time in the fight and landed elbows with one cutting Ige open. The right eye of Ige, already badly beat up, took more damage as the round ended.

Round 3, Ige tried his best to take a real shot at a finish, but was taken down quickly by Evloev. The rest of the round was Ige getting to his feet then dragged back down by Evloev. Fight ended with Evloev on top landing shots. 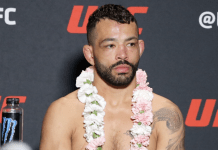 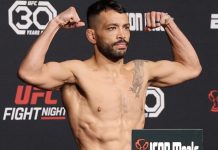