RIZIN 36 will head to the island of Okinawa in Japan this July.

In a press release distributed on Friday, RIZIN Fighting Federation officials announced their next event, the promotion’s seventh of 2022. The show will take place on July 2 at the Okinawa Arena.

“We are very excited to be back in Okinawa after a successful regional debut,” RIZIN CEO Nobuyuki Sakakibara was quoted as saying in the press release announcing RIZIN 36. “We will be having several local stars from legends to prospects who are motivated to showcase their skills on a major platform. We are excited to put on an event with full capacity and continue coming back to the wonderful island of Okinawa.”

Sakakibara would go on to state the promotion is hoping to produce seven to eight more events this year, with plans to “pick up the pace” starting this summer.

A full 13 fights have been announced for the event, with 11 MMA match-ups, and two kickboxing contests. They are: 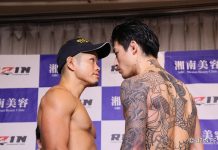