One of MMA’s top prospects will finally be making her UFC debut as undefeated Melissa Martinez is set to fight Hannah Cifers on September 10.   Lichald Scott was first to report the news.

The 23 year-old Martinez (7-0) is best known for having been one of the stars of Combate Americas, now Combate Global, which she was signed to after just one professional fight and fought six times under the banner.  “Super Mely” won the promotion’s inaugural strawweight title in her last bout in 2019 and has not competed in mixed martial arts since.  Martinez has competed in kickboxing on the national level for her native Mexico and recently completed her degree in Chemistry which she pursued while being an active fighter.

Cifers (10-7) will likely be fighting for her UFC job after dropping four straight losses in the past two years.  After entering the UFC with an 8-2 record in 2018, “Shockwave” dropped her debut fight before notching back-to-back victories.  She has been on her 0-4 skid since 2020 and has not fought since competing against Mallory Martin that year.  She did have a 2021 bout against Emily Whitmere scheduled before being forced to withdraw.

With the addition of Martinez and Cifers, there are now four bouts that have been added to the September 10 card.  A headliner and venue for the event has not been announced. 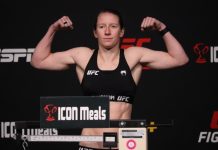