In his five-fight professional career, Eli Aronov has seen a lot of things. He’s seen tough gritty fifteen-minute fights. He’s seen big finishes that happened in no time. He’s heard the large crowds of Bellator cheer for him. But what he hasn’t seen is a cage outside of his homeland of Israel.

When Aronov steps into the cage this Friday at Unified MMA 45 in Alberta, it’ll be the first time he’s fought on foreign soil. However, he’s not worried about the nerves at all, because he’s dealt with exciting environments before.

“It’s exciting, there is no doubt about it. But I’ve fought in Bellator – it was in Israel – but I fought in Bellator and there was a ten thousand person crowd over there,” Aronov explained. “The arena was crazy. The environment, the organization – everything was super super crazy.”

At the end of the day, Aronov knows it’ll just be him and his opponent, 10-1 Canadian middleweight Mariusz Ksaizkiewicz, in there. Keeping the focus on that has helped him through this new situation.

“You go inside a cage and it’s you and your opponent locked in,” he said. “The crowd and everything doesn’t really matter. A fight is a fight. And I’m focusing on my fight and focusing on my skills.”

In addition to the Bellator experience and his mental fortitude, he has another reason he feels confident travelling halfway across the world to fight for the first time. Starting at a young age, Aronov wrestled at a high level, which brought him plenty of new opportunities.

“I was a professional wrestler since I was twelve years old. So I’ve been all around the world before and competed a lot outside of my homeland,” Aronov shared.

But even though he’s traveled and dealt with high stress environments before, Aronov does feel like this is a great first step towards the ultimate goal – a chance to fight in the UFC and win the middleweight title.

“Because I didn’t fight much outside of Israel, I feel it’s like my test,” he said. “Am I a UFC level fighter? How far am I and where do we stand?”

You can hear the entire audio of this interview at 39.23: 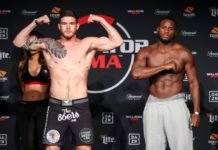