Among the additions to the card at the 3Arena in Dublin, Ireland is a previously reported featherweight match-up, featuring Pedro Carvalho (12-6) taking on Mads Burnell (16-4). Severe MMA first broke news of the pairing.

Carvalho vs. Burnell, however, carries the most weight in terms of divisional relevance. Burnell is fresh off a decision loss to Adam Borics — a fight that nevertheless seemed to boost the Danish fighter’s stock. On a seven-fight winning streak prior to the setback, Burnell goes up against former title challenger Carvalho with the opportunity to get right back in the mix.

After amassing a two-fight losing streak during the pandemic, Portugal’s Carvalho got back in the win column back in November, defeating German featherweight vet Daniel Weichel. But earlier this month, he dropped a split decision to Piotr Niedzielski.

Bellator Dublin, set to unfold at the 3Arena in Dublin, Ireland on September 23, 2022, is expected to be headlined by a lightweight bout featuring Benson Henderson against Peter Queally. Yoel Romero vs. Melvin Manhoef also features. The following match-ups have been reported for the event: 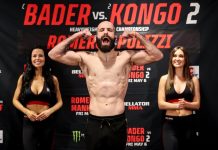 Bellator 280: Pedro Carvalho Feels Like He’s Himself Again After “Worst Time in My Career”