Damon Jackson will stay on UFC Vegas 56 after all.

Eurosport DNL was the first to report the news that Dan Argueta will be stepping up on short notice to fight Damon Jackson at UFC Fight Night: Volkov vs. Rozenstruik. Jackson was scheduled to face Darrick Minner, but Minner pulled out last week. A source close to the situation confirmed the fight to Cageside Press.

Since suffering his first UFC loss, Jackson (20-4) is riding a two-fight win streak. Most recently, he submitted Kamuela Kirk in March, and in his only fight of 2021, he defeated Charles Rosa.

Argueta (8-0) will be moving up to featherweight for his fight against Jackson. He is coming off an LFA bantamweight title win at LFA 131 against Diego Silva. Prior to that, he handed Mairon Santos his first professional loss at LFA 123 via TKO.

The UFC’s June 4, 2022, Fight Night card will take place at UFC Apex in Las Vegas, NV.
The card looks like this. 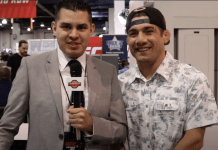