Both Elise Reed and Sam Hughes entered UFC Vegas 55 off the first win of their UFC careers, which meant someone was going to take the next step forward — while someone else was about to see their momentum deferred.

Hughes was busy with her footwork early in Saturday’s card-opener, but it was Reed finding success with her hands. That drove Hughes to tie things up, putting Reed against the fence, looking for a takedown. Reed was able to fend off a throw attempt, while Hughes fired some knees and briefly switched to a single. They’d break a moment later, resetting at center, but Hughes managed to clip her opponent with an elbow.

At range, Reed was getting her jab going, and landed several blows in a combo, with Hughes firing back a punch or two of her own. But with the volume favoring Reed, Hughes again looked get get the fight down, and this time, she landed the takedown. Hughes had to contend with a flurry of punches from bottom, but Reed remained grounded, at least until Hughes backed off and let her up. “Sampage” would go right after another takedown, and run out the clock.

Round two saw Hughes land a takedown right out of the gate. She landed in side control, but Reed was able to scissor her legs around Hughes’ left arm, briefly tying her up. Reed then reclaimed half-guard, and later worked from Reed’s guard. From there, Hughes just settled in, working in a bit of ground n’ pound. Hughes got up and backed off at one point, and Reed failed to scramble up to her feet. Instead, Hughes got back on top and finished the round in mount.

A fired up Sam Hughes went right after Elise Reed in the third, getting another early takedown. Reed tried to catch a guillotine with Hughes in side control, which had no hope of succeeding. Hughes then got in the driver’s seat, trapping an arm and threatening with a crucifix. When Reed defended that, Hughes smoothly transitioned to mount and began dropping elbows. Some of those started to get through, and with punches mixed in, the ref looked ready to call it. A few more elbows, and he did!

Sam Hughes claims her second straight win and first finish in the UFC with the victory. Unquestionably her best performance in the promotion to date. 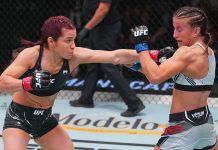 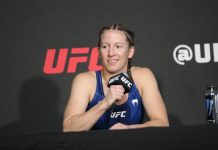 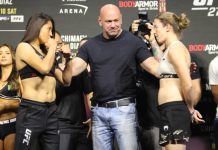