Las Vegas, NV — Brazilian strawweight Tabatha Ricci had a rough debut in the UFC, stepping in on short notice up a weight class against the surging Manon Fiorot.

After getting her first win under her belt back in October against Maria Oliveira, “Baby Shark” says she’s starting to feel at home.

Speaking to Cageside Press and other media outlets during Wednesday’s UFC Vegas 55 media day, Ricci (6-1) said that after her “crazy debut,” she’s no longer feeling pressure.

“Now I have this great opportunity fighting with someone super-experienced, and [who has] been in the UFC forever, for a long time,” said Ricci, who returns at UFC Vegas 55 on Saturday against Polyana Viana. “So I’m feeling no pressure, I’m feeling calm.”

The entire experience of fighting in the UFC is feeling normal now, she agreed. “I’m feeling normal. Like home.” And the Apex, where the UFC has hosted the bulk of their shows in the pandemic era, feels similar. “I really love to fight here in the Apex. I love the UFC staff, I feel like it’s family too, and I can say this is my like, third home. I’ve been here all the time, helping friends, and coming to the fight week. It’s good.”

Ricci’s fight has a fair amount of attention on it, but the 27-year old was surprised to learn she was on the main card this Saturday. “I didn’t even know I was going to be on the main card. I was watching the UFC on Saturday at home, and I saw my name on the graphic, and I said ‘oh damn.’ But I’m stoked, I’m excited for the opportunity that’s being given to me.”

Having seen teammates Piera Rodriguez and Mackenzie Dern pick up wins recently, Ricci added that she’s even more hyped up for her own fight. And she’s ready to show more of her stand-up. “100%. I’m ready to put some blood there.”

Watch the full UFC Vegas 55 media day scrum with Tabatha Ricci above. More coverage from the event can be found below. UFC Vegas 55 takes place this Saturday, May 21, 2022 at the UFC Apex in Las Vegas, Nevada. 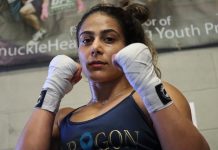 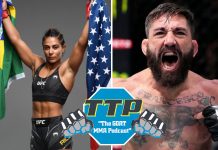