Having recently notched his first win in the promotion, the “Mongolian Murderer” is set to return in August against a fighter in search of his first UFC victory.

Aoriqileng (23-11) is set to take on Jay Perrin (10-5) at a UFC event on August 20, 2022. Iridium Sports Agency, who represent Perrin, announced the news on Monday. Perrin also confirmed the booking on his own social media profile.

The 28-year old from Inner Mongolia in China picked up his first win inside the octagon last time out, when he defeated Cameron Else. Prior to that, Aoriqileng had dropped two straight fights, to Jeff Molina and Cody Durden.

The Durden fight, a decision loss, thrust Aoriqileng into the spotlight after his opponent made disparaging remarks regarding sending him “back to China” in his post-fight speech. It seems Aoriqileng won’t be going anywhere just yet, however, as he’ll look to improve to 2-2 in August.

Perrin joined the promotion on short notice earlier this year, only to lose a decision to Mario Bautista back in February. A CES MMA bantamweight champ who appeared on Dana White’s Contender Series in 2019, Perrin had a two-fight win streak snapped in the loss.

No location, venue, or broadcast plan has been announced for the UFC’s August 20 event. No other fights have been reported for the card. 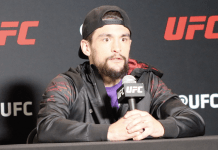 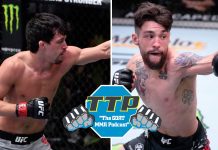