Cain Velasquez was denied bail for a second time on Monday morning, and will remain in jail awaiting trial.

Velasquez’s defense team offered that their client would agree to a bail amount of $1 million, wearing of tracking technology, and remaining under supervised house arrest.

Velasquez stands accused of attempted murder after he allegedly chased down a vehicle carrying an accused child molester, firing a .40 caliber handgun into it. He was arrested on Feb. 28 without incident and charged.

The defense had filed documents, later cited by Judge Shelyna Brown, that Velasquez’s actions could have been affected by traumatic brain injury and possibly chronic traumatic encephalopathy (CTE).

Brown declined to consider the claims by the defense in whether or not Velasquez would get bail.

Paul Bender, the man Velasquez is accused of shooting, appeared via video conference and gave an update on his health. He stated that his brachial artery was severed due to the shooting, and he was unable to use three of his fingers.

“Cain Velasquez has no respect for human life. He does not care about the rule of law. If given the opportunity, I think he will try to finish what he started,” Bender said. Bender was not the intended target of Velasquez, who had instead been pursuing his stepson.

Deputy district attorney Aaron French said that, because the victim survived, he and his family were still in danger from Velasquez.

“Look at the things [Velasquez] was willing to do. This is different than a murder case, where the victim is still there and still alive,” he said.

Next up for Velasquez is a formal plea hearing set for June 10th. 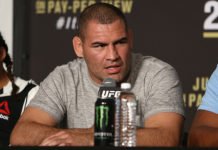 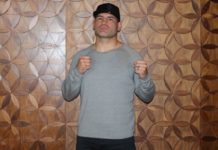