UFC Vegas 54 is official, and in the end, all fighters from Saturday’s Fight Night card made weight.

It didn’t seem as if that would necessarily be the case on Friday morning. Flyweight Carlos Candelario hit the scales at 127 pounds, a single pound over the flyweight non-title limit. Stripping down behind a barrier saw him lose a half pound, but he was still over the limit and looking drained.

Cadelario appeared determined to make weight, however, and continued his cut, afforded an extra hour under Nevada athletic commission policy. He’d hit the scale an hour later for a third and final time, coming in at 126 pounds on the nose.

The headlining pair of Jan Blachowicz and Aleksandar Rakic had no issues making weight on Friday, not surprisingly. They’ll top the show alongside another light heavyweight pair, Ryan Spann and Ion Cutelaba. Blachowicz and Rakic got nose-to-nose during Friday’s face-offs, but nothing came of it.

Full results from Friday’s UFC Vegas 54 weigh-in and a gallery of highlights can be found below.

* Carlos Candelario missed weight by 0.5 pounds. He was given one hour to make weight, and hit 126 on his final attempt. 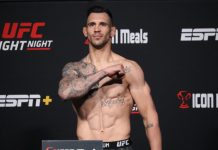