It’s really hard to imagine Rob Font vs. Chito Vera at UFC Vegas 53 being anything other than a knock down, drag ’em out war.

The style of both of these fighters promises an entertaining tilt. Any time either Font or Vera are involved, you know the chances of the fans getting what they’ve come to see is very high.

It’s unfortunate that Font missed weight on Friday. Although this fight didn’t necessarily have title implications, all it takes is for one of these fighters to have a spectacular performance, and come Sunday morning fans are going to be clamoring for them to be next in line for the title shot. The flub at the scales complicates matters, to say the least.

Font ended up missing weight by over two pounds, which isn’t a good sign for the New England Carter member. Vera is the last fighter you want to give an edge to, especially at this point in his career. Both men are entering the fight highly motivated, but while Font looks to rebound from a loss to a former champ in Jose Aldo, Vera just beat one in Frankie Edgar.

No matter who the victor is, its bound to be a hell of a fight atop UFC Vegas 53 regardless.

For more on Saturday’s UFC Vegas 53 main event, check out the video above. 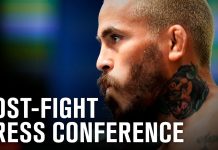