Once again set for the Apex, UFC Vegas 53 is headlined by Rob Font and Marlon Vera in a bantamweight bout. Among the card are names like Darren Elkins, Jared Gordon, Grant Dawson, Alexander Romanov, and more. To open up the show we’ve got two debutants. In that flyweight fight, Contender Series season five winner Carlos Candelario will be making his debut against the fellow newcomer Tatsuro Taira.

Tatsuro Taira
Standing at 5’7″
Fighting at 125 lbs (flyweight)
22-years-old
Fighting out of Deerfield Beach, Florida, US
Training out of Naha, Okinawa, Japan
A pro record of 10-0
3 KO/TKOs, 5 Submissions

How will Taira will do in the UFC:

It’s exciting to see the UFC go out and sign a top prospect instead of bringing them on in short-notice fights. Taira has been one of the best prospects from Japan the last few years. Although he’s not been fighting the best competition in Japan, Taira has beat a lot of well-experienced fighters.

Taira doesn’t have any glaring holes but definitely is better once he gets the takedown. His wrestling might not match how good his grappling is but it’s promising. You won’t see Taira land takedowns in space too often. He’s better at getting the fight against the cage and getting the takedown from there. It’s getting the takedown utilizing trips that’s what he’s good at. He’s also good at forcing guys to give their back along the cage and he’ll jump aboard.

Taira is someone you don’t want to risk going to the mat with. He has some high-level slick grappling. Taking the back and transitioning into dominant positions he is superb at. He’s the type of fighter that will jump triangle while in mount taking that risk. Taira is a submission threat that actively throws ground and pound.

Striking-wise, Taira has power and throws some good kicks to the body and legs. He can be a bit too patient with his hands and his head can be more moved off the centerline. He does keep his hands up and his footwork is good enough at a certain level. He has the power and shot placement but needs to work on everything else. Taira has a high ceiling and will be in the top 15 at some point in the future. I do think he could progress even more being so young.

How he matches up with Candelario:

Candelario is coming off a loss on the Contender Series but it’s a fight he should’ve won and Dana White still signed him. Back when Candelario was active in 2017 he was one of the best prospects at flyweight. Candelario is a better striker than Taira and even a better wrestler. He doesn’t want to take Taira down considering he’ll have to be in defensive mode the whole time. Candelario does have takedown defense issues and his gas tank hasn’t looked good. If this was a few years ago I’d pick Canelario. At this stage, I like the younger Taira. 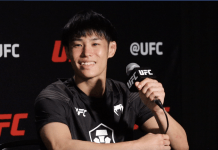 UFC Vegas 54: Tatsuro Taira Hoping for a Crowd Next Time Out, Will Celebrate Win at In-N-Out 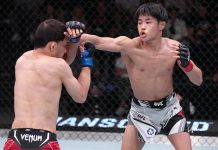