Following a big UFC 273 card in Jacksonville, one week later the UFC is back for a Fight Night in Las Vegas, Nevada. The main event is a rematch between Belal Muhammad and Vicente Luque. Contender Series contract winner Jordan Leavitt, who is 2-1 in the UFC, is welcoming newcomer Trey Ogden to the UFC.

Trey Ogden
Standing at 5’11″
Fighting at 135 lbs (bantamweight)
32-years-old
Fighting out of Kansas City, Missouri, US
Training out of Glory MMA and Fitness
A pro record of 15-4
11 Submissions

How will Ogden fare in the UFC:

Ogden has always been a solid regional fighter that was always going to make it to the UFC one day. He’s fought decent competition his entire career beating a combined record of 103-51. He’s won his last three and is deserving of this opportunity.

Ogden is very capable in every aspect of the fight game as he’s not great everywhere but good everywhere. The best thing Ogden brings to the table is no matter where he’s at he’s constantly working. On the feet his jab is solid and he’s always pressuring with kicks and punches staying busy. Ogden is a better wrestler and has an even better ground game. He stays busy there as well. He’s constantly throwing ground and pound mixing it up with his shot selection. It’s his submission base that has got him to the spot he’s at now. It’s all chokes with him being the guillotine or the RNC mainly. Even off his back, his guillotine is super slick.

Ogden is easy to take down and even easy to sweep once on top. He’s comfortable fighting off his back because he’s so tricky. Even fighting off his back he’s more active than the guy on top. The issue is he is getting taken down and isn’t too heavy when he’s on top. Odgen has been rolled over before being finished three times in round one by submission.

Ogden is in his prime right now and trains out of a good camp with overall solid experience. There are definitely wins Ogden can get in the UFC. Just because he is adaptable and has a good tank and against the bottom of the division he’ll find success. He’ll never be ranked nor anywhere close. I can see him as more of a guy to test the newer fighters in the division.

How he matches up with Leavitt:

The problem here is, Leavitt is a submission threat and the submission defense of Ogden is suspect. However, that’s all Leavitt has to offer. His wrestling is weak and he’s very limited on the feet. Even though Leavitt has been in the UFC, Ogden has better wins on his resume. Ogden is far better on the feet, is a much better wrestler, his jiu-jitsu is just as good, and he has a better gas tank. I can’t see how Ogden loses as long as he stays responsive to the submission attempts. 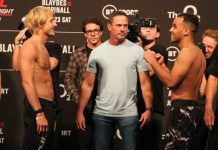