“Slava Claus” was coming to town in Columbus, Ohio on Saturday, as Vlacheslav Borshchev was set to face Marc Diakiese. The lightweight match-up kicked off the UFC Columbus main card at the Nationwide Arena.

In the end, it wasn’t a very merry visit for Borshchev, who was out-wrestled essentially from bell to bell, without even a glass of milk and plate of cookies to show for it.

It was Diakiese pressing the action early, driving Borshchev back to the fence. Diakiese stayed on the attempt while Borshchev employed a whizzer; he then reversed position, only to be reversed again. They’d spin around again, then again, Diakiese refusing to relent on the takedown. But in the process, he gave up his back, and as they separated, Borshchev let his hands go.

The pair, still in a clinch, would go to the ground, and come back up, before Diakiese finally landed a takedown, pulling Borshchev’s feet out from under him. When Borshchev regained his feet, Diakiese hoisted him up and dropped him down with a little more force. That would happen again, with about 90 seconds left in the round, after Borshchev was warned by the ref for grabbing the fence.

Round two saw Diakiese looking for a takedown again, and he had it within the first minute. Borshchev found himself on his back, seemingly miles from the fence, with Diakiese in his guard. Diakiese spent lots of time in control, and as Borshchev tried to escape out, he was dragged right back down. He then tried to roll his way out; that didn’t work either, but Borshchev was able to scramble up, only to be taken down again.

Come the third round, it was rinse and repeat. Borshchev had no answer for the takedowns of Diakiese. He was planted on his back early, nowhere near the fence, much to the displeasure of the fans at the Nationwide Arena in Columbus, who hollered their disapproval as Borshchev shrimped back to the cage. When Borshchev got up, Diakiese slammed him back down, with next to no offense from “Slava Claus” by the end. 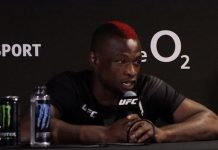 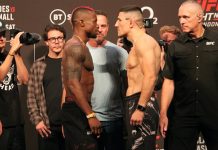