While the UFC was in London over the weekend for a big Fight Night card, it was far from the only MMA action to be found. Among cards from Cage Warriors (UK, Friday) and KSW (Poland, Saturday) was RIZIN 34, set for Osaka, Japan on Sunday, March 20.

The massive 17-fight event featured a couple of names familiar to western fight fans, primarily UFC vets Kiichi Kunimoto and Daichi Abe, fighting each other. In the main event, meanwhile, featherweight Satoshi “Dominator” Yamasu was set to face Kyohei Hagiwara, who went 2-1 through three fights under the RIZIN banner last year, with the lone loss to Mikuru Asakura.

RIZIN 34 takes at the Maruzen Intec Arena in Osaka, Japan on Sunday, March 20, with an International PPV with English commentary available via LIVE-NOW. Full results from the event can be found below. 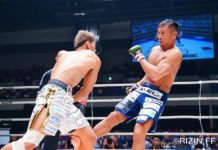 RIZIN 26: Satoshi Yamasu vs. Mikuru Asakura — Under the Radar