RIZIN Fighting Federation returns with a spectacular end of the year show this week. RIZIN 26 will take place in the famous Saitama Super Arena in Japan. The New Year’s Eve show is headlined by Kai Asakura and Kyoji Horiguchi. Also, the two will be fighting for the RIZIN Bantamweight Championship. Also stacked on the star-studded card is the famous Tenshin Nasukawa and Takanori Gomi.

However, a fight that’s not getting enough shine is Satoshi Yamasu versus Mikuru Asakura. Before his loss to Juntaro Ushiku at Deep 97 Impact back in September, Yamasu (11-5) was on a roll. The athlete’s unorthodox offense has led to a lot of success. Specifically, Yamasu’s grappling ability is specialized and the Japanese athlete possesses a variety of rare submissions if the fight hits the ground.

In contrast to Yamasu, Asakura’s (13-2) super aggressive style is a crowd-pleaser. Not only that, but the product fighting out of Tri-Force Jiu-Jitsu Academy has eight knockouts on his resume. With power like that, staying mobile and out of the pocket would serve Yamasu well. Consequently, Asakura has fast damaging knees inside the clinch. Tons of pressure surrounds the fight because before losing his last bout, Yamasu was on an 8-fight winning streak. Interestingly, before running into Yutaka Saito at RIZIN 25, Asakura was riding a 9-fight win streak. So it’s safe to say, neither athlete is accustomed to losing.

Yamasu’s karate style may give him the edge on the feet, but it should be noted that Asakura has faced several experienced kickboxers and come out on top. Differing from Yamasu’s style of striking, Asakura is more dangerous in the pocket and close quarters. But if the fight hits the ground, many believe the wild grappling exchanges will benefit Yamasu’s game.

RIZIN 26 takes place December 31, 2020 at the Saitama Super Arena in Saitama, Japan. The English-language live stream of the event will be available via Live-Now. 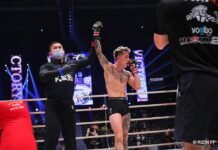