Rob Font vs. Marlon ‘Chito’ Vera is one of several big fights to have been reported this week.

Font vs. Vera is targeted for a five round main event on April 30, per an initial report from ESPN. The fan-friendly match-up has the UFC faithful salivating on social media, for what is expected to be an action-packed, entertaining bantamweight fight.

There is an interesting common denominator for both men ahead of the fight: the last defeat on both of their records came against Brazilian legend Jose Aldo. A bitter feeling that both Font and Vera no doubt want to put behind them in this five round fight.

Marlon ‘Chito’ Vera has had a couple of fights since his loss to Aldo, as he went back the drawing board and put together a string of wins, most recently KO’ing Frankie Edgar at UFC 268. Prior to that outing, Vera won a unanimous decision in a rematch with Davey Grant, which also claimed Fight of the Night honors.

Rob Font will look to get back to his winning ways after his loss to Jose Aldo this past December. Font has not competed since; prior to the loss, he had won four straight, including wins against ex-champ Cody Garbrandt and challenger Marlon Moraes. 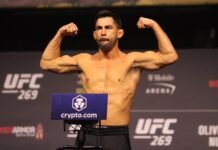 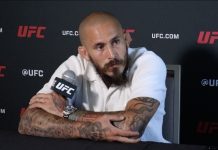