For a brief time after her December loss to Gillian Robertson, Priscila Cachoeira was the UFC’s public enemy #1. Blatant eye gouging while attempting to escape Robertson’s “throat cuddles” led to calls for Cachoeira’s release — not just from fans, but fellow fighters as well.

Making her return to action at UFC Vegas 49, Cachoeira was paired up with Ji Yeon Kim — and would almost certainly be under the microscope.

Kim sat on the outside early, while Cachoeira came over the top with a big, looping punch. The Brazilian definitely had some mustard on her strikes, while Kim worked her jab, fired a combo, and tried to maintain the distance. As they continued to trade, both girls landed — but Cachoeira’s shots were without question the more significant of the two. Cachoeira wound up chasing her South Korean counterpart around the cage, but anything Kim landed, the Brazilian seemed to brush off.

There was more trading in the second, with Kim seemingly forgoing the obvious path to victory against Priscila Cachoeira: wrestling. Instead, she continued to circle, and was more active in terms of volume— but significant strikes were still a different story. Kim fired off a high kick, mixing things up, which Cachoeira blocked. Cachoeira would then draw Kim into another violent exchange. The Brazilian worked the body a little, and Kim began finding success timing some of Cachoeira’s big swings, landing easily after each as the Brazilian left herself wide open.

In the final minute of round two, Cachoeira and Kim would do a bit of trading in the pocket, the flight slowly devolving into a brawl.

Round three was a brawl right out of the gate, one that Cachoeira was only too happy to engage in — but that soon backfired. Cachoeira was suddenly backpedaling, as Kim continued to pick her apart after each of the Brazilian’s big swings. A big right hand landed with a crack for Kim. Cachoeira was far from out of it, but through the first two minutes of the round at least, Kim was very much out to a sizeable lead. Her jab connected again, Cachoeira’s overhand in response did not.

Cachoeira’s face was telling a story, and it was far from a happy one in her case. Kim’s right hand connected again, and again, with Cachoeira just trying to walk through it. Then, almost certainly behind in the round, Cachoeira managed to catch Kim with an elbow along the fence, opening up a cut on the cheek of the South Korean. Another big standing elbow for Kim landed, and suddenly, she was a lot bloodier, and in danger of being finished. Cachoeira continued to fire elbows, mixing in a couple of jump knees. Everything Cachoeira threw was with vile intentions, making the final round an all-out war.

These women are SWINGING for a finish! 👊 #UFCVegas49 pic.twitter.com/LoBRt5faQc

Falling back on her Muay Thai paid dividends for Priscila Cachoeira, who captured the decision victory in the end to get back in the win column. 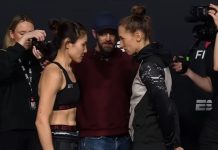 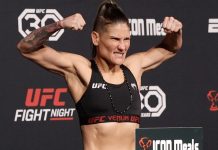 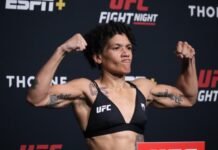