The largest weight miss in UFC history has necessitated a fight moving up an entire weight class for UFC 271 this Saturday.

Friday morning, light heavyweight William Knight hit the scales at 118 pounds for his fight with Maxim Grishin. That miss, a full 12 pounds over the non-title limit for the weight class, marks the largest miss in UFC history.

The previous record holder was Rafael Alves, who missed weight by 11.5 pounds for a featherweight fight last year.

Knight’s opponent, Grishin, had already weighed in at 206 pounds, leading to the very real possibility that the fight would be cancelled. Instead, shortly after Knight’s miss, UFC officials announced that the bout have been shifted to the heavyweight division.

Though it was initially unclear whether Grishin (32-9-1) would receive a percentage of Knight’s fight purse, as would be the case when a fighter normally misses weight, promotion officials later confirmed Knight would cough up 40%. Regardless, the Russian has accepted the bout up a weight class — though Grishin is no stranger to the heavyweight division. He actually started his UFC career there, in a losing effort against Marcin Tybura.

For Knight (11-2), the mishap at the scales is his first time missing weight in the UFC. Prior to joining the promotion, he did compete at heavyweight once, under the CES MMA banner.

UFC 271 goes down Saturday, February 12, 2022 at the Toyota Center in Houston, TX. The following fights are attached: 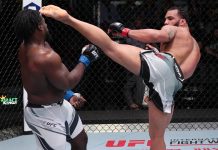 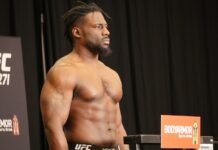