Make no mistake, UFC 271’s Marcelo Rojo is here for just one kind of fight. He made that clear when he made a short notice debut against Charles Jourdain and they proceeded to steal the show. Rojo is here to throw down and this weekend, when he faces off with Kyler Phillips, he’s hoping to see that same kind of fight yet again.

“If he’s going to trade punches with me, I’m glad because I feel really comfortable in that position,” Rojo said. “If he wants to see who knocks the f*ck out of who, I’m down for that.”

However, it’s not just a hope for Rojo – the Argentine said he’ll actually be disappointed in Phillips if he starts to shoot for takedowns and tries to turn it into a grappling match. He’ll be so disappointed, that he may even resort to a bit of name calling to goad him back into the fight that he wants.

“I’m hoping he’s going to come to a war and not a wrestling match or a jiu jitsu match,” he explained. “I’m going to be pissed. If he takes me down, I’m going to say ‘you pussy! Stand there and fight me!”

But for Rojo, it isn’t just that that type of fight favors him and he’s looking for the easiest possible route. Instead, he knows that if the two were to stand and trade for the better part of fifteen minutes, there would be a good chance that he would walk out of there with full pockets.

If Rojo were to pick up his first Octagon victory, we may see something never before seen in the Octagon. Those familiar with Rojo’s work on the regional scene know he’s been known to bust out a celebration mirroring the movements of a raptor as well as some other unique moves. While he doesn’t plan it out, he’s leaving the door open if the raptor is what the people want.

“I don’t know, bro. I don’t plan that sh*t. It’s kind of weird – every time I do something different,” he said. “But people want to see the raptor again, so maybe I’m going to bring an awesome knockout and then I’m going to raptor.”

Marcelo Rojo fights Kyler Phillips on the pay-per-view main card of UFC 271. The main card kicks off at 10pm EST this Saturday.

You can hear the entire audio of this interview below at 1:53. 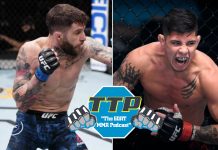