Speaking to the media on Wednesday Jourdain spoke on his surprise when the UFC took his offer to step in against Ilia Topuria.

“He’s one of the biggest prospects in the UFC and that was a very courageous decision. But I’m more scared of, let’s say, guys with 30 fights and like 8 losses because these guys are still fighting even though they went through hardships. So seeing an undefeated guy, I was this undefeated top prospect coming into the UFC as well, so yeah people think it’s very dangerous. It is, but I’ve got more experience now and I’m willing to take that challenge,” Jourdain said.

“I was actually surprised that nobody got in line for that fight. Topuria is a very fun fight to watch, fun fighter to fight, so I was surprised they said yes to me.”

Jourdain (12-4-1) knows that Topuria (11-0) is coming off two knockout wins over Damon Jackson and Ryan Hall but he does not fear the power of the Spaniard.

“It’s not a style that I’m not accustomed to. He said I’ve never faced someone who hit as hard as him. I can bet $100 or $1000 that Doo Ho Choi hits ten times harder than this guy. Doo Ho Choi I took his punch and my whole world was shaking and I was like, ‘Man this is a very strong man.’ I’ve never felt that power again even I’ve faced some very experienced men in the UFC. So Topuria thinking as a 135er can have more power than Choi I really doubt that.”

Jourdain still isn’t taking his opponent on Saturday night lightly regardless of the difference in experience.

Charles Jourdain faces Ilia Topuria at UFC 270 on Saturday, January 22 at the Honda Center in Anaheim, California. Watch the rest of his media day scrum above. More coverage of Wednesday’s media day can be found below. 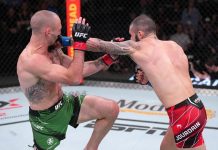