Triad Combat 2 will see several UFC and Bellator veterans take on established boxers in the latest installment from Triller which will take place in Houston on February 26.

On Thursday, Triller Fight Club announced the rest of the undercard for their second Triad Combat event which will feature several more UFC veterans.  Along with the undercard, the promotion also announced that the event would take place at the Toyota Center in Houston, Texas.

Former UFC champion Junior dos Santos announced yesterday on social media that his headlining bout against Kubrat Pulev would take place on February 26, a date previously unconfirmed amongst reports.  A co-headlining bout between another former UFC champion in Vitor Belfort and former boxing middleweight champion Chad Dawson has also reported for the event.

Leading the undercard announced by Triller is former kickboxing champion and Bellator veteran Joe Schilling (4-6 MMA, 23-9 Kickboxing) taking on Armin “The Bosnian Prince” Mrkanovic.  Mrkanovic (10-3 Boxing) returns to the ring for the first time since 2019, the same year as Schilling’s last professional bout. 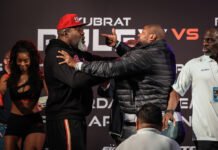