Heading into UFC Vegas 45, the story behind Justin Tafa vs. Harry Hunsucker was probably about how long the fight would actually last.

The heavyweight affair seemed to have high potential for a finish, after all. Then, Tafa went and missed weight — marking the first time in UFC history that a heavyweight fighter had done so (not for lack of effort on Greg Hardy’s part, mind you).

In the end, Tafa managed to make the story about how long the fight would last once again. And the answer, as it turns out, was “not long.”

Hunsucker opened the fight with a low kick and followed it up with a second. Tafa fired back with a crushing left that sent Hunsucker to the mat. Tafa followed and as Hunsucker scrambled he took his back. Both men made it back to their feet and Tafa kept Hunsucker’s back, but Hunsucker worked for a kimura before the two went crashing back to the mat. Hunsucker again went for the Kimura and Tafa escaped. Back on the feet, Hunsucker pressed forward with combinations and then shot in— but Tafa shrugged him off and followed it up with a devastating head kick that dropped Hunsucker and ended the fight, sending the ref in immediately.

That’s a highlight reel finish for Tafa, that should erase all memory of the weight flub. 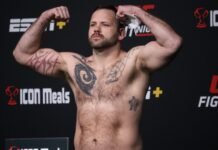 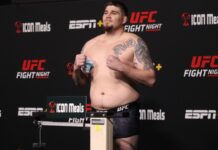