Melissa Gatto picked up her second win in the UFC at UFC Vegas 45, TKO’ing Sijara Eubanks in the third round.

Sijara Eubanks’ second stint in the UFC women’s flyweight division hit a snag Friday when she missed weight for her UFC Vegas 45 bout with Melissa Gatto.

For Eubanks, it was her second time missing weight in the division. That’s discounting being pulled from The Ultimate Fighter 26 finale, losing out on a shot at the inaugural 125lb title in the process.

Up against Eubanks was the aforementioned Gatto, still undefeated and entering the second fight of her run with the organization.

Eubanks started off quick, rushing across the cage and getting a big takedown to land in full guard. Gatto kept an extremely active guard and as a result, Eubanks couldn’t get anything off from the top in the way of strikes. Gatto from her back was threatening tons of submissions, throwing up everything from an armbar, to a triangle, to an omoplata attempt off her back. She wasn’t able to get anything secured and ate a big flurry of strikes to end the round.

Eubanks was more active on the feet to start round two. She was able to land a few combinations before getting a big slam takedown halfway through the round. However, Gatto used a kimura to roll and get on top in half guard. Gatto dominated the round in terms of position but wasn’t able to get off a whole lot in terms of strikes. However, she did end the round throwing a nice flurry to send the action to the third frame.

Eubanks came out active to start the third round. However, Gatto eventually found her biggest strike of the fight, as she landed a front kick to the body of Eubanks that sent Eubanks down. Gatto jumped on with some ground and pound to seal the deal and keep her undefeated record intact.

UFC 274’s Tracy Cortez: “Hopefully I Can Put Arizona On The Map” 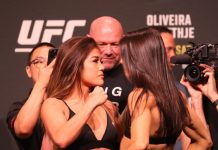