Two of the top prospects in the women’s flyweight division threw down at UFC 269 when Miranda Maverick took on Erin Blanchfield.

Maverick entered the fight looking to shake off a controversial loss to Maycee Barber, a fight many felt she had won. Blanchfield was coming off a September win over Sarah Alpar in her octagon debut, and was looking to claim a second win under the UFC banner against fellow Invicta FC alum Maverick.

Blanchfield declined a glove touch to start the fight, and went right after Maverick, who stayed mobile on the outside. When Maverick tried to counter, Blanchfield caught her out of position, and took Maverick to the mat. Blanchfield controlled from the back; Maverick powered her way up, only to be forced back down. Blanchfield kept a body lock on, landed a knee, and the next time Maverick escaped up, Blanchfield used a trip to take her down again.

This time around, they stayed grounded a while, Blanchfield working to pass Maverick’s guard. When Maverick did get back up there were all of 90 seconds remaining in the round — and another trip would put her down again.

Round two saw Blanchfield’s relentless takedown game continue. Within a minute and a half, Maverick was on her back, well away from the fence. Blanchfield trapped her in a crucifix, and began dropping ground n’ pound. Maverick was in a bad spot; Blanchfield then went after an Americana. The submission attempt, however, was the window of opportunity for Maverick to escape the crucifix. She didn’t stay free for long, and moments later, Blanchfield was working on a kimura. The round ended with Blanchfield working on a kimura, while Maverick managed to trap her opponent in a head scissors choke at the same time.

Maverick got her hands going early in the third, capping off a combination with a head kick that was blocked. Maverick later changed levels for a takedown, but couldn’t complete it; Blanchfield retreated to the fence, reversed, and took Maverick down instead.

From there, Erin Blanchfield was once again in the driver’s seat. She easily cruised to the decision win, mounting her opponent before the end of the bout. And with a total of eight, Blanchfield set the women’s flyweight single-fight takedown record. 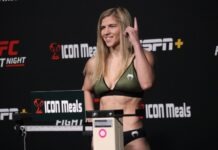