Yahya (27-10-1) and Kang were supposed to fight on July 31. The pair did interviews, weighed in, faced off, and then the day of the fight, Yahya tested positive for COVID-19. Kang would not get another opponent, and the bout was scrapped.

The Brazilian had hoped that the fight would happen a lot sooner, like in September or October, but November is when the pair will finally fight. Fingers crossed and knock on wood.

Yahya was happy that the fight was rebooked, and that he didn’t get a new opponent. He is also excited that he finally gets to put hands on Kang because he was so close to last time.

“I think it was better for it to be against him because we did everything before, we had the camp, we had the weigh-ins, we had the faceoff,” Yahya told the press during the UFC Vegas 43 media day. “The only thing that didn’t happen was the actual fight. During the faceoff, I felt the heat. All with respect, he’s a respectful guy, but I felt I need to put my hands on him.”

During this new training camp, Yahya said that he didn’t change the game plan. Instead, he just sharpened the game plan and got better with better technique.

Yahya and Kang will finally do battle on the main card this weekend.

Watch the rest of Rani Yahya’s UFC Vegas 43 media day interview above. More coverage of the event can be found below. 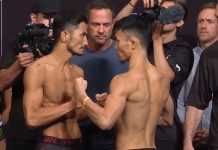