A pair of top bantamweight prospects will collide at a UFC event next March.

Multiple sources, speaking on the condition of anonymity, have confirmed to Cageside Press that Jack Shore will fight Umar Nurmagomedov on March 19 at a yet-to-be-announced UFC event.

Shore (15-0) has been perfect thus far in his UFC career, defeating all four of his opponents. The Welsh fighter is coming off of his most active year in the promotion. He defeated Hunter Azure via unanimous decision in April and then finished his year picking up a win against Liudvik Sholinian. Shore would fight Sholinian with a torn bicep.

After multiple fights fell through for him in 2020, Nurmagomedov (13-0) was successful in his UFC debut against Sergey Morozov earlier this year, winning via rear-naked choke.

It will be more than year since his last fight when the cousin of Khabib Nurmagomedov steps into the octagon against Shore. The pairing will also see one fighter lose their unblemished record, given the duo are a combined 28-0 in their professional careers to date.

The UFC’s March 19, 2022 event does not have an official location, venue, or broadcast plan announced. There are rumors the UFC will be going back to London but nothing official has been announced. No other fights have been announced. 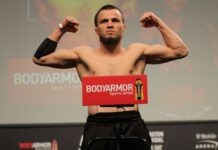 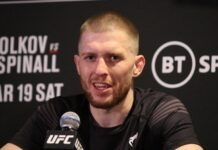