Cris Cyborg met a game Sinead Kavanagh in the Bellator 271 main event — and made short work of her.

A little over 90 seconds is all it took for the fearsome Cyborg to knock out Ireland’s Kavanagh, earning the women’s featherweight champ her third consecutive title defense. Almost immediately, talk turned to who would be next, especially given free agent Kayla Harrison was in the stands.

“Everybody’s talking about Kayla Harrison, but Kayla Harrison is not signed with Bellator,” Coker acknowledged following the bout. “I know she’s a free agent, I think we’re going to start talking with her management early next week, and see if we can bring her into the roster. Then we could maybe start promoting that fight.”

Before that happens, however, Coker appears ready to look to his existing roster for a challenge for the Brazilian. “I think for Cyborg, the next fight is— we have a couple girls in mind, I think Cat Zingano is definitely one of them.”

Zingano, a former UFC bantamweight title challenger, made her debut for the promotion last year, and has won both of her fights to date. She last competed in April, submitting the little-known Olivia Parker.

“We’ll decide that as we circle back and start talking to the fight team early next week. We’ll have something,” Coker continued. The Bellator chief envisions a relatively quick return for his featherweight star. “We want [Cyborg] to fight again as early as February or March next year. We want to turn her around as soon as she wants to. We’ll have some opponents for her.”

While Cyborg later suggested she didn’t want to give her “shine” to Harrison on Friday, Coker believes she’s on board with the match-up, should the promotion ink Harrison to a deal.

“This is something that she’s fine with. She goes ‘if you get on the roster, then let’s get it on.’ That’s her attitude,” Coker explained. “If she’s not on the roster, then there’s nothing to talk about. Like why even talk about it? If we put it together, I think you’ll hear a lot more chatter between the two girls.”

Watch the full Bellator 271 post-fight press conference with Scott Coker above. More coverage from the event can be found below. 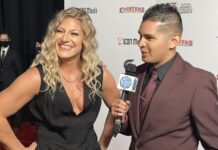 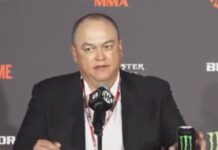