With the women’s featherweight title on the line in the Bellator 271 main event, another 145lb pair faced off earlier in the night.

That fight saw top contender and multi-time title challenger Arlene Blencowe up against Pam Sorenson, the latter fresh off her first win in the promotion. The duo kicked off the Bellator 271 main card in Hollywood, Florida.

A former Invicta FC champ, Sorenson was hoping to shake things up, and maybe fast-track to the top of the division with a win over Blencowe.

Blencowe opened up the fight like she had other ideas. An early right hand landed; an exchange followed, Blencowe getting the better of things. Sorenson was soon retreating, Blencowe pursuing and backing her up into the fence. Sorenson would then pursue a takedown, initially defended. Sorenson stayed on it, and Blencowe went to a knee, but was able to stay upright.

The pair would spent a good chunk of time there, before the ref finally reset them at center. That put the fight back in Blencowe’s wheelhouse, and when Sorenson fired a leg kick, Blencowe checked it — and fired a three-punch combination moments later.

Blencowe continued to find success on the feet in the second. Her right hand was on the money, more often than not successfully countering Sorenson. Pam would get clipped backing straight up and move to a desperation takedown, which Blencowe was able to fight off.

Sorenson’s struggle to get the fight down continued in the third. Blencowe kept showing her heavy hands on the feet. All of which added up to a clear decision win for Arlene Blencowe — but having come up short in two title fights already, including one against current champ Cris Cyborg just over a year ago, a third crack at gold might be a while in the making. 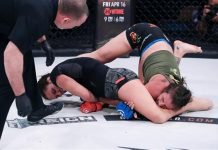 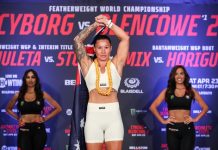