Going down at the 3Arena in Dublin, Ireland on Friday, the event saw Patricky Pitbull become the first man to stop Peter Queally, claiming the vacant 155lb belt in the process.

The title had been held, and held up, for over two years by Patricky’s brother Patricio, the former Bellator featherweight champion who claimed a second title by defeating Michael Chandler in 2019. Following the win, Patricio Pitbull would enter the featherweight grand prix, never defending his second belt.

In the co-main event, Patchy Mix submitted local hero James Gallagher, with the only flaw in his showing having been a miss at the scales on Thursday.

Full results and a gallery of highlights from Bellator 270 can be found below. 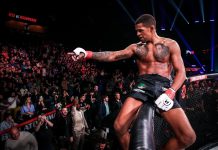