Off the heels of her second straight PFL championship, let’s take a look at Kayla Harrison’s possible next fights.

Kayla Harrison decimated Taylor Guardado in order to claim her second straight PFL women’s lightweight championship and another million dollars on top of that. Harrison (12-0), since debuting in PFL in 2018, has cemented her place as one of the greatest female fighters on the planet, and with her contract having expired with the PFL, she is also now the biggest free agent on the planet.

With that being known, let’s take a look at where she can be headed next, and who she could be fighting in that promotion 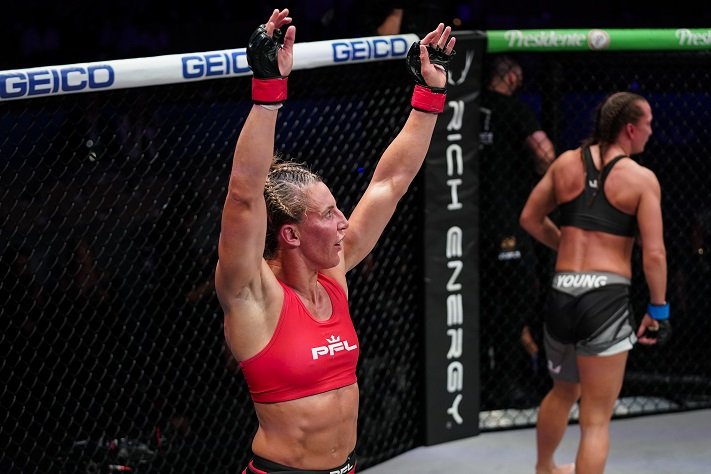 If Harrison doesn’t want to leave home, she has a clear new contender in the PFL lightweight division. Former Bellator champion Julia Budd signed with PFL earlier this year and announced her plans to move up to the lightweight division, which she did on the undercard of Harrison’s title bout. Easily defeating former Invicta title challenger Kaitlin Young via unanimous decision, she proved she’s easily one of the greatest fighters already in the division.

The signing of Budd always seemed like one that was meant to entice Harrison to stay. Harrison wants to prove she’s one of the best on the planet by fighting the best, and while not a natural lightweight, Budd is still one of the greatest featherweights on the planet. The other main upsides for Harrison is that she can stay at lightweight which is an easier cut for her, and she’ll likely have an easier path to making millions. She’d also be able to have different crossover bouts in promotions such as Invicta, with whom the PFL has a good relationship.