You hear the stories all the time about fighters who have taken the long road to the UFC. Parker Porter made his UFC debut in 2020 after thirteen years on the regional circuit. Chris Curtis will finally make that walk next weekend at UFC 268 after turning pro in 2009. You won’t get that kind of story out of this weekend’s debutant, Benoit Saint-Denis, though.

In fact, Saint-Denis has only been in the sport for a little over two years. However, feels confident that he still has the experience that will help carry him at this level.

“I love to fight – my first year in mixed martial arts I fought six times in eleven months, when I started my career in 2019,” Saint-Denis explained. “I’m still fresh in my career. I started two and a half years ago. Signing with the UFC in this little amount of time is because I’ve been active. I’m very proud of that.”

Although he’s only been in the sport for a blink, his training goes far beyond this. Not only did he start the early part of his life with martial arts, but he also was in good shape from his time in the french millitary.

“I had been doing judo from [age] 8 to 16. But my first dream was to be a special forces operator, and when this achievement was made, I was still curious. I wanted to do something new,” he said of his progress. “I started right away in competition, after one week of practice of BJJ – I fell in love with it.”

It wasn’t just BJJ that caught his eye, but also kickboxing. He began competing in both instantly and had loads of success. That success, he attributes a lot to his time with the special forces.

“I was always in good physical shape,” Saint-Denis remarked. “Which led me to a lot of progress in a short amount of time.”

Not only did he make progress, but he proved his abilities too. He backed it all with an 8-0 record largely fighting for Brave CF, who he credits with giving him the right challenges. Now he looks forward to a new challenge – Elizeu Zaleski dos Santos. The eleven-fight UFC vetran stands in front of Saint-Denis and that elusive first win. However, just as always, he feels he’s ready.

You can catch this entire interview with Benoit Saint-Denis at 34:29. 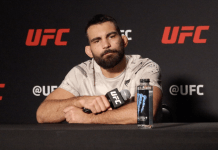 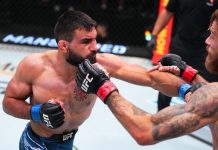 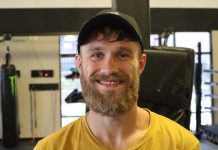 UFC Vegas 56: With Back Against the Wall, Niklas Stolze Says He Must Prove He Deserves to Be In UFC