Bruno Silva got quite the comeback victory at UFC Vegas 40, knocking out Andrew Sanchez after being dominated the first two rounds.

After a decade-long career on the regional circuit and later in Russia’s M-1, Bruno “Blindado” Silva had arrived in the UFC earlier this year and immediately made a statement.

With a finish of fellow Brazilian Wellington Turman, Silva put his fellow middleweights on notice — and at UFC Vegas 40 on Saturday was paired up with Ultimate Fighter winner Andrew Sanchez.

Sanchez was looking to bounce back from a January loss to Makhmud Muradov.

Sanchez predictably opened up with what always is his main strategy, wrestling. Sanchez seemed to be getting takedowns at will, mainly because Silva had no problem working off of his back. Silva liked to throw elbows off his back but they didn’t seem to have much effect against Sanchez, but he did make Sanchez work to pass and as a result, Sanchez was a bit winded heading into the second round. Unfortunately, Sanchez had two kicks to the groin in round one, which would come back into play later.

Silva came out in the third frame looking for a finish. Sanchez was visibly gassed to start the round. Silva was once again kicked low, the third time in the fight. As a result, Sanchez had a point deducted. Rather than hurt him, that third low blow seemed to fire up Silva. He came out of the break and quickly hurt Sanchez, keeping up the pressure and ripping the body. With Sanchez starting to cover up as Silva went upstairs, the Brazilian went on to secure the comeback victory as he knocked out the depleted Sanchez.

A foul-filled night saw Silva endure a full three low blows in the fight. But he’d get his hand raised in the end. Sanchez has now been finished in the third round in back-to-back fights. 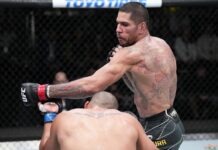