Willis is quite athletic and a top-notch wrestler. On top, he has the control, the transitions, and the ground-and-pound to excel. Willis is everything you want in a fighter, especially in terms of wrestling. On the feet, he does hold a lot of power in his hands. Willis is a bright prospect under the Bellator banner. He fights Mukhamed Berkhamov (14-1).

Williams is a smart articulate fighter. He’s gone the distance more times than he’s finished the fight and that attests to a well-conditioned fighter. Montel is a jiu-jitsu guy that has good wrestling. He has technical grappling and more than anything, he’s a grinder. Someone that will frustrate a lot of guys. He fights Josh Neal (6-2).

Lopes is coming off a loss on the Contender Series a few weeks ago. He looked good in a controversial loss to Joanderson Brito. He’s a very talented fighter fighting out of Mexico. He’s beaten some good fighters like former UFC fighter Marco Beltran, Masio Fullen, and TUF Brazil winner Rony Jason. Lopes is a strong grappler with a jiu-jitsu black belt. He still needs to work on his striking but has a lot of good qualities. He throws a solid jab and leg kicks. Lopez is good at slipping punches and coming over the top with an overhand right. He’s also good at ducking under punches and getting the takedown. Lopes has glue-like grappling with dominant ground and pound and a dangerous submission base. He fights Nate Richardson (8-3).

Mowles has fought quality opponents his entire career. He’s only lost to Tony Kelley, Damon Jackson, Miles Johns, and Raufeon Stots who are UFC and Bellator fighters. On the other side of the spectrum, he’s beat Jimmy Flick, Adrian Yanez, Jose Johnson, Ahmet Kayretli, and James Gonzalez. On the feet Mowles isn’t the best but as soon as the fight hits the mat, he’s a slick grappler. Mowles has seven submissions, the ground being where he thrives at. He fights Johnny Campbell (21-13).

Pauga is an impressive fighter out of Team Elevation who has had an awesome pro career thus far. He’s primarily a wrestler but has some upside on the feet. He throws well to close the distance and in the clinch, he’s physically strong, has a really good right hand, and has some very nice elbows he throws both in the clinch, and while he breaks away. Pauga is a strong wrestler and on top his ground and pound is his best weapon. Once again, those elbows are a valuable weapon for him on the feet and on the mat. He fights former UFC fighter Markus Perez (12-5). 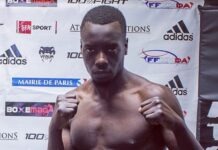