Marina Rodriguez made herself a contender in the women’s strawweight division at UFC Vegas 39 with a decision victory over Mackenzie Dern. In the co-main event, Randy Brown defeated Jared Gooden via unanimous decision. Dern versus Rodriguez won Fight of the Night and Lupita Godinez and Mariya Agapova won performance of the night bonuses. Today we will look into what is next for the winners of UFC Vegas 39.

This win puts Rodriguez on a three-fight winning streak with her last three wins being against Dern, Michelle Waterson, and Amanda Ribas. After her victory, Rodriguez called out Joanna Jedrzejczyk for her next fight. She also said that Weili Zhang should not be fighting Rose Namajunas and that Carla Esparza deserves the next title shot. Jerdrzejczyk has not fought since her she lost to Weili Zhang in March of 2020. Her kickboxing style matches up great against Rodriguez and the winner of this fight will likely be right next to Esparza as a number one contender. If the UFC can lure Jedrzejczyk back to action, they should.

With his win this past Saturday, Brown is now 4-1 since 2019. His only loss was a TKO at the hands of Vicente Luque. In his last two fights, Brown has defeated two very durable opponents in Jared Gooden and Alex Oliveira. Brown showed great standup skills in his fight with Gooden and should be looking to fight another guy with exciting finishing ability. Niko Price is that guy. Price is coming off a decision win over Alex Oliveria a few weeks ago. Ten of Price’s 15 wins coming by knockout and he has a brown belt in jiu-jitsu. His mix of striking and grappling skills should make for a great match-up with Randy Brown.

Matheus Nicolau won a decision over Tim Elliott at UFC Vegas 39. All three judges scored the contest 29-28. This was a very close fight but Nicolau has looked great in his latest stint with the UFC. Prior to this fight, Nicolau was ranked 11th in the flyweight division, while Elliott was ranked ninth in the division. Meaning Nicolau should be ranked inside the top ten once the rankings are updated. Number four ranked Alex Perez is set to fight number eight ranked Matt Schnell in December. The winner of that fight will likely be in a number one contender spot. The loser will be in a must-win situation in his next fight. Nicolau fighting the loser of Schnell-Perez would be a win-win situation for both parties. While it would be a winner vs. loser pairing, the rankings need to matter sometimes.

Mariya Agapova was able to submit Sabina Mazo in the third and final round of their bout this past weekend. She was winning the fight standing and eventually rocked Mazo in the third round. When Mazo fell, Agapova jump straight into a rear-naked choke. This makes Agapova 2-1 in the UFC and 10-2 overall. While she called out Maryna Moroz after the fight, Moroz recently pulled out of a bout and her status is uncertain.

Erin Blanchfield is another up-and-comer in the women’s flyweight division. Blanchfield won her UFC debut by decision over Sarah Alpar in September. She is 7-1 in her career with her only loss being a split decision loss to Tracy Cortez. A win in this fight would be a huge spark in either one of these women’s careers.

Chris Gutierrez was the beneficiary of a last-minute shake-up to UFC Vegas 39, which resulted in his fight with Felipe Colares being promoted to the main card. As much as such things matter, given the entire even was on ESPN+ anyway.

In any case, Gutierrez earned himself a split decision win over Colares, which improves his UFC record to 5-1-1. That’s not too shabby at all, though Gutierrez has bounced around between bantamweight, featherweight, and even a 140lb catchweight.

Now that he’s back at bantamweight, how about a rematch? Outside of the UFC, Gutierrez picked up a win over the highly touted Tim Valiev. Valiev was supposed to be fighting this coming weekend, but was forced out due to injury. Depending on the severity of the injury, running this on back inside the octagon makes sense, and adds a nice little storyline to the fight. 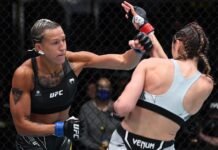