With Sam Hughes out of her planned fight with Lupita Godinez this weekend, Silvana Gomez Juarez will make her octagon debut on short notice.

ESPN Deportes was first to report news of Hughes being out of the UFC Vegas 39 fight, reportedly due to COVID-19 protocols. Cageside Press confirmed Hughes’ removal on Tuesday. ESPN was also first to report that Juarez would step in as her replacement.

Hughes (5-3) had been in search of her first win inside the octagon in the strawweight fight. That will have to wait. Argentina’s Juarez (10-2) was to appear on Dana White’s Contender Series in a week’s time, but will instead step into the UFC proper just days later than originally planned.

Juarez currently rides a three-fight win streak, and previously competed for both Combate Americas and KSW. One of her two professional losses came to current UFC fighter Ariane Lipski under the KSW banner. The other came against another UFC notable, Poliana Botelho.

Juarez also holds a win over the UFC’s Vanessa Melo.

Lupita Godinez (5-1) made her octagon debut on short notice earlier this year when she stepped in for Hannah Goldy against Jessica Penne. She was then booked into a bout with Sarah Alpar in May, only to run into visa issues. That led to the match-up with “Sampage” Hughes, and now Gomez.

The UFC Vegas 39 card is headlined by a strawweight bout between Mackenzie Dern and Marina Rodriguez. The line-up currently breaks down as follows: 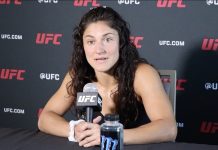 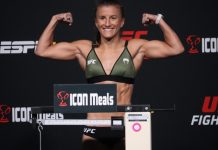