After dropping his first two fights in the octagon (including a Fight of the Night war in his debut against Brad Riddell), Jamie Mullarkey had earned his first win in the UFC last time out. At UFC Vegas 38 on Saturday, he was looking to build on that, paired up with Contender Series alum Devonte Smith, who was 3-1 in the promotion to date.

The match-up screamed fireworks. It did not disappoint.

Round two started with both men retaking the center of the octagon. Mullarkey landed a nasty heavy kick which seemed to hurt Smith. Mullarkey went back to the kick but only partially landed. Two minutes into the second round and Mullarkey was walking Smith down, catching him with a punch where the knuckle appeared to graze the eye. Mullarkey clinched Smith and started dropping knees. Mullarkey dug into the body and landed a combo that hurt Smith while he was against the fence. From there he unloaded on him, which made the referee step in and wave off the fight.

What a comeback by @Jamie_Mullarkey 🇦🇺

Great comeback win for a clearly improved Mullarkey. That is two straight wins for the Australian, both by stoppage. 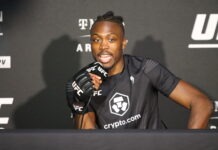 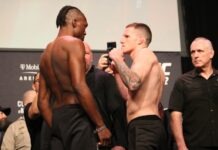