Paddy Pimblett’s UFC coming out party had been a long time coming. When it finally arrived Saturday, kicking off the UFC Vegas 36 main card, it proved worth the wait.

Pimblett, as our own prospect scout extraordinaire Shawn Bitter noted ahead of the fight, has a tendency to get cracked in his fights. And that happened once again against Brazilian Luigi Vendramini. The English fighter found himself rocked, but fought through the adversity, and soon dished out more punishment than Vendramini could take, finishing “The Italian Stallion” 35 seconds shy of the buzzer in the opening round.

Pimblett’s efforts netted him one of two $50,000 Performance of the Night bonuses handed out following the nine-fight event. The other went to countryman and co-main event heavyweight Tom Aspinall.

Aspinall’s rise up the heavyweight ranks has been a quick one; in less than 12 months he had collected two Performance of the Night bonuses in three fights, stopping Jake Collier and Alan Baudot on the feet, then submitting ex-champ Andrei Arlovski. Both the Collier and Arlovski fights earned the big man bonus checks; UFC Vegas 36 saw him collect bonus #3 for his TKO of Sergey Spivak, set up with a nasty standing elbow.

Fight of the Night honors at UFC Vegas 36 went to Molly McCann and Ji Yeon Kim for their hotly contested women’s flyweight fight. McCann walked away from that one with a much-needed win, earning a unanimous decision victory with scores of 29-28 from all three judges. 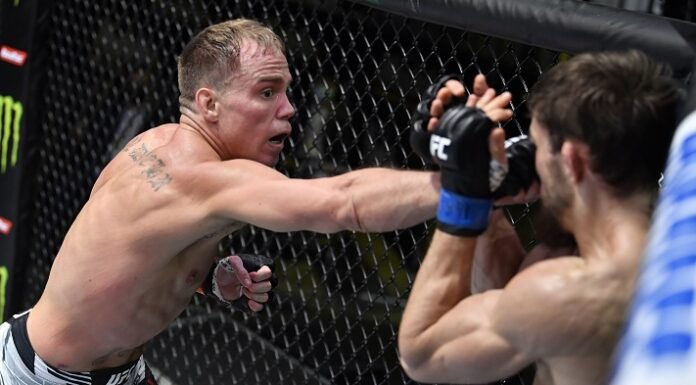