UFC Vegas 36 hosts a 10-fight card, as middleweight contenders Derek Brunson and Darren Till face off in the main event. The event took a hit with twelve total fight cancellations in the lead-up to the card. Not to mention a change in location. One fight that stayed intact was Luigi Vendramini (9-2 MMA, 1-2 UFC) welcoming newcomer Paddy Pimblett to the UFC.

Paddy “Pressure” Pimblett
Standing at 5’10″
Fighting at 155 lbs (lightweight)
26-years-old
Fighting out of Liverpool, England
Training out of Next Generation Liverpool
A pro record of 16-3
5 KO/TKOs, 7 Submissions

How will Pimblett fare in the UFC:

Among the fans that have watched Pimblett are either huge supporters or those believe he’s over-hyped. I’m in between when it comes to the “Baddy.” I do think Pimblett is a very talented fighter that does deserve this UFC call-up. I also think his skill set is a little overblown and has a lot of holes.

Where Pimblett excels is in the grappling. He’s an opportunist who will take any submissions given to him. From any position, he’s working to finish. He’s also very tricky as he holds two flying triangle finishes. Pimblett is aggressive off his back, attacking leg locks, and is really good at taking the back. His biggest flaw on the mat is his lack of physicality. For example, in his losses to Nad Narimani and Soren Bak he was out-muscled. Pimblett though never stops working and even off his back he won’t accept being stationary. His wrestling at best is exceptional. He favors a single leg but is much better at chain wrestling. If he gets his hands clasped around the legs or body he’s going to get the takedown.

Pimblett falls short on the feet and although he’s tough he drastically needs work. He is explosive and throws well with his legs. He is extremely hittable and in nearly every one of his fights he gets cracked. When getting hit his body language and reaction isn’t a good look. Even a decent striker will have success on the feet against Pimblett.

Pimblett is still only 26 so there is a lot of room for growth. If his last two performances are a testament to what he looks like now he’s going to be a problem in the near future. If the UFC builds him up properly he can develop into a really good fighter

How he matches up with Vendramini:

This is both a good match-up and a tough one for Paddy Pimblett. Vendramini, though not by a wide margin, has the advantage on the feet. Pimblett is faster and more explosive but Vendramini hits hard and pressures well. Pimblett does have better wrestling. Vendramini is a black belt in jiu-jitsu but I’ve been far more impressed with the ground game of Pimblett. Even though Vendramini has been in the UFC for two years Pimblett has fought the better competition. While many are high on Vendramini here I just don’t see it. Pimblett should at least win two rounds. 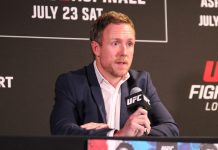