Julian Erosa and Charles Jourdain threw down at UFC Vegas 36 as both landed big shots before a submission victory for Julian Erosa.

Jourdain, 1-1-1 across his last three fights, was looking for a second straight win, while Erosa looked to bounce back from a loss to Seung Woo Choi which had snapped a three-fight win streak.

Erosa quickly took the center of the octagon, pushing Jourdain against the cage. Jourdain fired a sprinting combination, but missed his three punches and slipped after a head kick attempt. Erosa caught a body kick, drove Jourdain to the cage and delivered a knee to the body. A right straight caused Jourdain to stumble and Erosa walked him to the cage, nailing him with a left hook to the body. Erosa chained together a combination of hooks, but Jourdain answered with two left straights down the pipe. Jourdain landed another left straight, then Erosa cracked him with an uppercut and a combination that caused him to stumble backwards again. A strong finish to the round for Erosa.

👊 @JuicyJ_Erosa letting it all fly in the last few seconds of RD 1!

Erosa touched Jourdain with a few left hooks behind the guard to start the second round. Jourdain then landed a body kick and delivered several hooks. Erosa backed Jourdain to the cage with another combination, but a front kick caught Jourdain below the belt as he jumped in the air, stopping the action briefly. A big left hook landed for Erosa and one followed for Jourdain closed the distance. Jourdain needed the entire octagon to land a big combination, and it did, with a trio of hooks finding the mark. A big hook then knocked Erosa down. It was a big bounceback for Jourdain.

It was an action-packed start to the final round as Jourdain closed the distance and delivered solid hooks to Erosa. Erosa weathered the storm and pushed Jourdain against the cage, achieving a takedown. Jourdain attempted to stand up, but a window opened for Erosa as he snatched up a d’arce choke. Jourdain couldn’t separate at all and was forced to tap.

JUICY J gets it locked in TIGHT to end it! 🔒 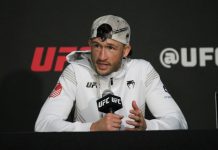 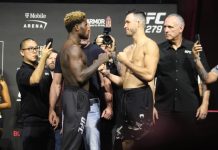 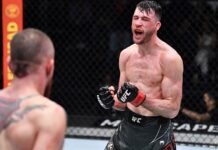