Ramiz Brahimaj returned to the octagon at UFC Vegas 34 for the first time since his promotional debut against Max Griffin — a fight that had seen his ear pretty much explode.

With his ear nearly falling off the side of his head, it wasn’t exactly the debut Brahimaj wanted, though it was a memorable one. On Saturday, however, he was looking for a better result against Sasha Palatnikov.

He absolutely got one.

Both fighters took the center of the octagon after a touch of the gloves to kick off the UFC Vegas 34 card. Brahimaj shot for a takedown almost and landed it. He was trying to set up an arm-triangle, but Palatnikov defended. Brahimaj transitioned to full mount very quickly and landed some nasty ground and pound. Palatnikov gave up his back, and Brahimaj locked up a rear-naked choke. Palatnikov defended the choke for about a minute, but it was under the chin, and he wound up going to sleep.

What a bounce-back win for Brahimaj, who made a fantastic second impression on Saturday.

Locked it in TIGHT 🔒😳@170Ramiz gets it done in RD 1 at #UFCVegas34! pic.twitter.com/Ar5uHLCNgd 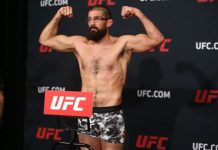 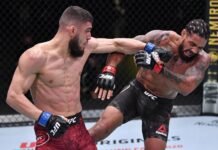