Bellator 265 has lost what was a very promising co-main event.

Thursday morning, at the event’s official weigh-in, Jay Jay Wilson came in 4.4lbs over the featherweight limit for his fight with Adam Borics. The pairing had been announced as an official title eliminator for the 145lb division.

The welterweight fight between Logan Storley and Dante Schiro, meanwhile, has been promoted to the co-main event slot.

Wilson (8-0), an undefeated talent out of New Zealand, has struggled to make weight in the past. In his last appearance, against Pedro Carvalho, Wilson hit the scales at 146.8lbs, just a shade over the featherweight limit. Two fights prior, he had also missed weight, coming in at 147.9lbs for a fight against Tywan Claxton.

His third time missing weight in just nine fights, however, marks the first time a fight has been lost for Wilson.

Borics (17-1) had won three straight since being bounced from the promotion’s featherweight grand prix in January 2020. Most recently, he defeated UFC vet Jeremy Kennedy in a unanimous decision. 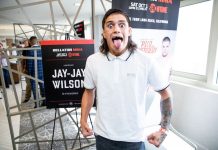 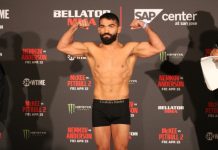 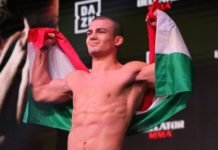